Hiring and the Gig Economy

Hiring and the Gig Economy

A protest over Uber in Portland, USA

And what about the workers themselves? The gig economy is often described by businesses as a way to take control of your work/life balance, be your own boss and have complete flexibility over your life and schedule.

In a study carried out by Glassdoor, however, only 13% of workers said they would consider working in a gig economy job as a full-time solution, with the rest saying that they would feel “more secure” in full-time permanent employment. It has provided a more intriguing solution for those who are looking for part-time work, however, with 27% of workers open to the idea.

Regardless of whether the gig economy is ultimately a positive or negative addition to the UK workforce landscape, it’s clear that, as the Deliveroo tribunal draws closer, the way companies are able to operate using gig economy workers could very well be set to change before the year is out. The knock-on effect this could have on businesses and their workers remains to be seen, but with more and more large companies becoming invested in the response, don’t expect the conversation around gig economy to end any time soon.

Beck puts this difference down to the massive increase in low-paid, flexible arrangements between businesses and workers – or the gig economy. According to Beck, these account for around half of the jobs created in the last few years.

The ability of big businesses to use labour as and when they need it and the shift towards less secure types of employment “have all made workers more compliant and less willing and able to push for higher wages”.

Still too, the argument against this form of work brings up concerns over worker rights. Employment law has yet to catch up to modern ‘on demand’ goods and services that consumers now gladly pay for in exchange for convenience. This may all change by the end of the year, as food delivery company Deliveroo face a tribunal battle to assess whether its drivers should be classed as “independent contractors” or “workers” – the difference being that workers have the entitlement to things such as the national minimum wage, holiday pay and union access.

Newspaper The Guardian uncovered a case with courier company Hermes, accusing them of “abusive practices and failing to pay the minimum wage”. Competitor CitySprint had a similar issue, wherein their couriers wore CitySprint uniform and carried an ID, but were classed as “independent contractors” – a practice that ultimately was classed as unlawful.

Using the legal loophole of calling its drivers self-employed contractors, they lose this protection. Deliveroo argue that this system allows their drivers to be fully flexible in how many hours they work – that they can pick up work as and when they choose, in order to truly accommodate to consumer needs.

So why, then, should the gig economy be seen as anything except a crack in the system, or a problem to solve?

Firstly, the consumer demand is really there. In the age of instant gratification, supported by other on demand services such as Netflix and Spotify, consumers are no longer satisfied to simply wait for things, or indeed inconvenience themselves in any way.

SMEs and start-ups also often rely on the gig economy – many believe that a flexible workforce is “important to their company’s profitability” and see it as something that can provide “flexibility and opportunity”.

The Confederation of British Industry (CBI), after running a report on this phenomenon, have described it as an “invaluable strength” to Britain, given its incredibly positive effects of the unemployment rate. 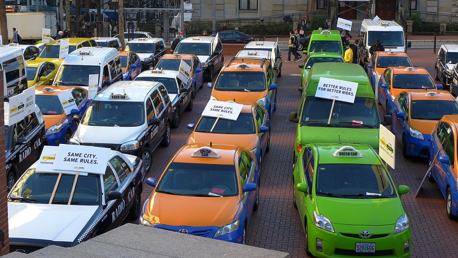 Rarely a day spent out of the news, the ongoing conversation around the gig economy is getting louder than ever. It can be defined roughly as the recent influx of low paying, highly flexible workers used by ‘On Demand’ goods and services provided by companies such as Amazon, Deliveroo and Uber. It can also be used to encompass self-employed workers who run businesses through internet platforms such as eBay or Etsy.

Why is the conversation so prevalent?

With unemployment at 4.6%, the UK is in what is classed as “full employment” (i.e. anything under 5%). Typically, this leads to a market where employers are struggling to find workers and as a result, wages rise due to employers setting competitive salaries. In 1975, when the unemployment rate was last at a comparable level, average wages were “increasing by around 30% on a year earlier”, according to Economist Martin Beck, in a note published in May 2017. Indeed, data shows that workers on zero-hour contracts such as gig economy workers make up 2.8% “of all employed people in the UK”

With average wage growth in the UK currently only at around 1.9%, something isn’t quite right.