Brexit Update: The Value of the Sterling

Brexit Update: The Value of the Sterling

We discussed in our previous article in July the likely effects of Brexit on the Economy, and the recruitment industry. Now, 4 months since this historic result, we are beginning to better understand the economic and political landscape. In short, most of the warnings issued by the treasury and other bodies such as the IMF have not manifested themselves into anything significant (for the moment at least!). The UK has a new prime minister – one mostly opposed to her predecessor’s vision for the country – and a new cabinet department tasked with managing the negotiation process with the EU.

The Bank of England, in addition, has thus far played a vital role to calm world markets. Following the Leave vote, the Governor moved to reassure the country that it indeed had a plan not only to deal with the immediate turmoil, but also to manage the country’s economy whilst it negotiated an exit from the Union. This included, most profoundly, cutting the Bank Rate to an all-time low of 0.25% (from already a historic low of 0.5%). Perhaps even more interestingly, the Bank also voted to increase its programme of quantitative easing, increasing the purchases of Gilts to £435bn. There is now speculation that the Bank might cut the Rate down to 0.1%.

Most of the changes in the landscape since the vote have been technical in their nature, i.e., the changes per se won’t necessarily impact a citizen’s day-to-day life – at least not immediately. One change, however, is a noticeable exception: the plunge in value of sterling, which hit multiyear lows (against the dollar, say) in October. Gone are the days where the pound bought you two dollars (before 2007, say); and even the days where it bought a dollar and a half – the average “recovery” value following the ‘great crash’ in ‘07. We now explore the impact of this change in more detail.

One would imagine the fall in value of an asset spells bad news all round. This, however, is not necessarily universally true here. Some respected voices have welcomed the fall citing their belief that the pound was overvalued in real terms. There are ‘winners’ in this scenario, but, inevitably, much of the focus has been on the ‘losers’:

• Consumers: a decrease in currency value is directly proportional to an increase in the price of goods and services. The pound is simply worth less, and this implies inflation will increase: it is predicted to rise to over 2% (from close to zero a year ago).

• Importers: the import cost to (sterling denominated) businesses has increased to 7.2% in September. Businesses now face the choice of reducing profit margins, or passing the additional costs on to consumers.

• Depositors: the value of savings will reduce and this reduction in value will be magnified by the likelihood of a further Bank Rate cut (or at least remaining at record lows).

The winners, moreover, include:

• Exporters: a drop in the value of the pound implies goods (and services) are cheaper to sell overseas. Manufacturing data has indeed recently indicated a rise in activity.

• Investors: the FTSE 100 dived soon after open following the referendum result; but since (the plunge) has climbed to record highs (thanks in part to the exchange rate). This, however, is only a ‘winner’ for local investors – the dollar-termed index is down for the year!

• Balance of payments: with exports on the rise, together with a rise in foreign investment income, the country’s current-account deficit (at a record high in recent years) will be reduced.

We mentioned above, furthermore, the FTSE’s performance since the referendum result: the index has peaked above 7,000 points and reached a record high. This has primarily been down to a weaker pound but has also been bolstered by the Bank’s quantitative easing programme. This to some is a cause for concern: a recent poll of investment professionals (from the CFA Society) citied 66% of respondents saying (developed) markets were overvalued. The concern here is that if shares are thought to be overpriced, markets are susceptible to significant (perhaps even violent!) change. 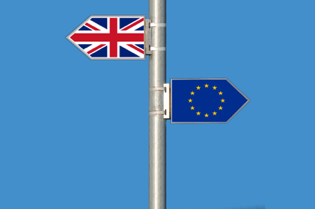 The decline in the pound’s value has, in addition, contributed (inevitably) to a significant rise in inflation. Inflation increased from 0.4% to 1% but, interestingly, is still below the Bank of England’s target of 2%. This has been the first significant change in economic conditions to directly impact ordinary citizens – the price of fuel and groceries, for instance, will be felt at every level of society. It was unsurprising, therefore, for opposite factions in the campaign to cite this change to reinforce their past arguments! On 27/10, moreover, it was announced the economy grew by 0.5% for the 3 months since the result; compared to 0.7% in the second quarter. This is still up from the 0.2% growth figure predicted by the Bank. This figure, however, does not provide us with much more information per se about the state of the economy: the UK is still within the EU and so the economy has not had to significantly adjust. It is unwise, thus, to say it is immune to economic headwinds.

We conclude our discussion on an important note: Prime Minister Theresa May’s announcement the UK will trigger Article 50 by the end of March 2017. Now that we have a definitive date for the negotiation process, much of the speculation over the timeline for Britain’s departure has ceased. This, however, has led to further (and perhaps more profound) uncertainty over the ‘type’ of Brexit for which the UK will opt: ‘Hard’ Brexit implies that the UK will no longer operate within the Single Market and so an end to the free movement of labour; whereas a ‘Soft’ Brexit points to some interconnectivity with the single market, but, crucially, the continuation of the free movement policy.